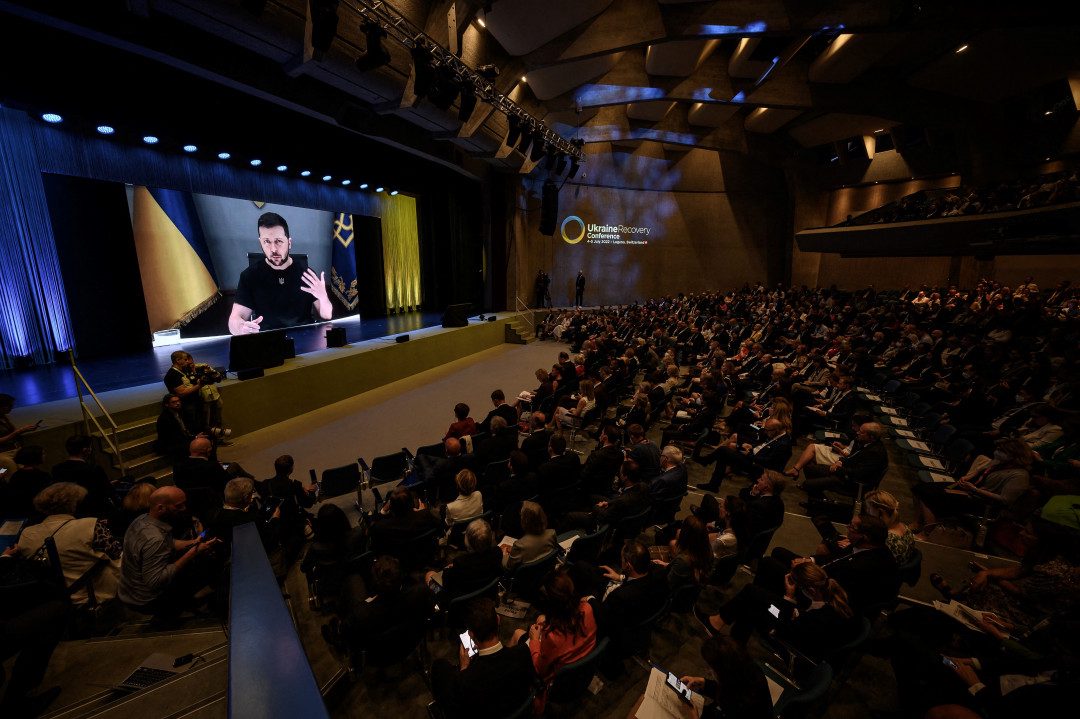 President Volodymyr Zelensky delivers a statement virtually at the start of a two-day International conference on the reconstruction of Ukraine, in Lugano on July 4, 2022. (via Getty Images)

Dear readers, we are launching a new newsletter, Belarus Weekly, and you are the first to see it! To receive the Belarus Weekly newsletter in the future, subscribe via this link.

UK Intelligence: Russia’s capture of Lysychansk extends its control across virtually all of Luhansk Oblast. According to the latest U.K. Defense Ministry intelligence update, Ukrainian forces withdrew from Lysychansk “in good order, in line with the plan,” likely allowing them to withdraw to a more readily defendable frontline. The update also said that Russia’s fight for Donetsk Oblast “will almost certainly” be similar to its battle for Luhansk Oblast, characterized by slow rates of advance and extensive use of artillery, leveling towns and cities.

Institute for the Study of War: Russia’s stated objectives in Ukraine remain constant, despite military setbacks. The U.S. think tank reported on July 5 that Russia’s baseless goals of “denazifying and demilitarizing Ukraine” have remained the same since Feb. 24., regardless of rhetoric following defeats indicating a potential reduction in war aims. Meanwhile, Russian war hawks are reportedly pushing for the realization of maximalist goals in Ukraine, urging further territorial gains and regime change in Kyiv.

Ministry: 44 children kidnapped by Russia return to Ukraine-controlled territory. Prior, the children were illegally taken to Russia and the Ukrainian regions occupied by Russia in 2014, Ukraine’s Ministry of Reintegration reported. The majority are orphans or children deprived of parental care.

Governor: 40 explosions reported in Chernihiv Oblast on July 5. Governor Vyacheslav Chaus said Russian forces fired artillery at the village of Bleshnia near the Russian border on July 5. According to preliminary data, there were no casualties.

Russia reportedly preparing mobilization in occupied Berdiansk. According to the National Resistance Center, a Ukrainian government website, Russia started preparing to forcibly conscript men into the Russian Armed Forces in occupied Berdiansk, Zaporizhzhia Oblast. The center added that the pace of illegal mobilization is increasing in occupied Luhansk, where recently all men working at a local meat processing plant and a culture academy have been conscripted.

3 Russian missiles shot down near Odesa Oblast. Russia shot three Kh-59 missiles at Ochakiv and Chornomorsk in Odesa Oblast on July 5. They were shot down by air defense systems while they were still above the Black Sea, according to the Operational Command South of the Ukrainian Armed Forces.

Zelensky demands explanations from General Staff over conscripts’ travel restrictions. President Volodymyr Zelensky demanded that the military explain its decision to institute special permits for conscripts to travel across the country. “I ask the General Staff not to make similar decisions without me in the future,” Zelensky said. The General Staff of Ukraine’s Armed Forces said on July 5 that people subject to military service, conscripts, and reservists would have to obtain permission from the local military registration and enlistment office in order to leave their place of residence.

SBU detains man suspected of spying for Russia in Kharkiv. A 41-year-old local resident was collecting information about the location of military units, facilities and defense fortifications, and passing it to Russian forces, according to the Security Service of Ukraine, or SBU.

Erdogan says Ukraine, Russia close on grain deal. “Negotiations are going ahead so that this grain, and sunflower oil, everything can reach the world,“ Turkish President Recep Tayyip Erdogan said during a joint press conference in Ankara with Italian Prime Minister Mario Draghi, Politico reports. Draghi said that Turkey had “a central role” in the plan. “That role is to guarantee the security of ships, and ensure that the ships don’t carry arms,” Draghi added.

Reuters: Ukraine asks Turkey to investigate 3 Russian ships over grain theft. According to Reuters, back on June 13, the Prosecutor General’s Office asked Turkey’s Justice Ministry to probe three ships traveling from Russian-occupied Crimea in April and May. Kyiv says the grain they transported was stolen from Ukrainian territories occupied by Russia.

SBU: Aide to current lawmaker uncovered as FSB agent. According to the Security Services of Ukraine (SBU), the unnamed man was paid anywhere between $1,500 to $4,000 dollars to collect information about Ukraine’s international cooperation, domestic politics, border policies with the Russian Federation, and the war in Donbas. He was recruited by the FSB during a trip to Moscow. He is now under suspicion for treason, the maximum punishment for which is life imprisonment.

Read our exclusive, on the ground stories

Over 40 countries and international organizations such as the European Investment Bank and the Organization for Economic Cooperation and Development signed the Lugano Declaration on July 5, committing to support war-torn Ukraine in what is expected to be a long and expensive rebuild. Read our story here.

Although Russia surpasses Ukraine in terms of weapon capabilities, the number of troops it has committed to Ukraine is insufficient for the full-scale war it’s waging. Russia’s hawks have urged Russian dictator Vladimir Putin to introduce martial law and to initiate full or partial mobilization to expand the size of Russia’s army and boost its war effort. If this happens, the scale and number of victims of Russia’s war are likely to increase. Read our story here.

Ukrainian farmers begin the July harvest knowing there may be nowhere to store their grain or export it, as Russia’s naval blockade of Ukrainian Black Sea ports enters its fifth month. According to Ukraine’s estimates, 22 million tons of grain already stockpiled across the country remain in their silos. By fall, that number may reach 60 million. Read our story here.

The human cost of Russia’s war

At least 2 killed, 7 wounded in Russian shelling of Sloviansk. Donetsk Oblast Governor Pavlo Kyrylenko said on Telegram on July 5 that two people were killed and seven others injured in shelling which hit the city market. Sloviansk Mayor Vadym Liakh confirmed that the city market was struck and caught fire.

Japan expands sanctions against Russia, Belarus, bans import of gold from Russia. The expanded list of sanctions includes 90 individuals and legal entities, including Russian collaborators in temporarily-occupied Kherson Oblast. Japan also introduced a ban on the import of gold from Russia, as well as a ban on the export of goods to 65 Russian and 25 Belarusian manufacturing companies.

France to help reconstruct Chernihiv Oblast. In light of the Ukraine Recovery Conference in Lugano, Switzerland, the French Foreign Ministry issued a statement saying it will complement its ongoing assistance to Ukraine with a focus on reconstructing Chernihiv Oblast, with which it has “ancient ties.” Chernihiv Oblast was hard hit by Russian bombardments in the initial stage of Russia’s full-scale war.

Ukrainian mathematician Maryna Viazovska wins Fields Medal, the most prestigious award in mathematics. Viazovska, 37, is a Kyiv-born and raised professor at the Ecole polytechnique federale de Lausanne in Switzerland. She is the second woman in history to receive the Fields Medal, often described as the Nobel Prize of mathematics.

If you’re enjoying this newsletter, consider becoming our patron on Patreon or donating via GoFundMe. Start supporting independent journalism today.

This article is under the CC-BY-SA-NC license.

Need instant translation in your browser? Use the plug-in/extension ‘Translate Web Pages’ for either Firefox or Chromium browsers:

No comments yet. Be the first to react!